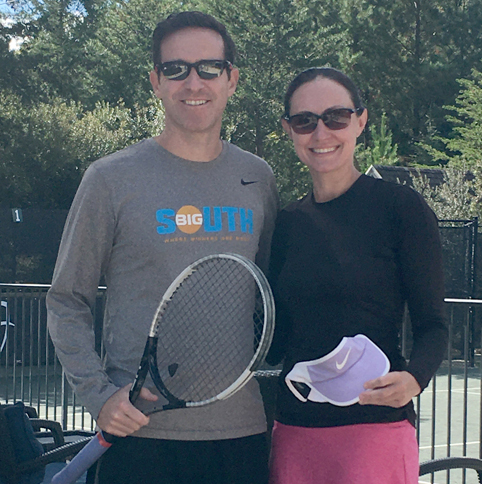 Ep. 4: Does Your Racquet Matter? Tips For Finding The Right Racquet

Carolyn is joined by her husband, Mike, and asks the question “Does Your Racquet Matter? Mike is an NTRP rated 4.0 player and has taught himself a lot about racquets and strings. Mike gives tips for adult recreational tennis players to find a racquet that works well for them.

It’s not an easy decision when picking out tennis racquet. It’s the single-most important piece of equipment. Unlike in golf when a player has multiple clubs to pick from for different shots, a tennis player needs to be able to hit ground strokes, volleys, overheads, servers, etc. piece of equipment. You could have several racquets in your bag to pick from but you can only play with one at a time, so it needs to work for you for all shots.

Mike tells Carolyn that he started playing as an adult, he went to a used sporting goods store and bought a few pre-owned racquets. He was a student in college at the time and on a tight budget. Those racquets worked well for him for almost 10 years.

Time for a new racquet

After graduation and getting married, Carolyn and Mike both started playing tennis as adults. Mike was told he needed a new racquet when taking a lesson at his local club from a tennis pro named Meghan. Meghan let Mike hit with hers and he figured out quickly that he was able to hit with more top spin and control. The tennis balls were staying in the court with a much-higher success rate, and he felt like that new racquet gave him more hitting power.

What matters with a new racquet?

Some of the main specs that players look for when shopping are head and frame size. Having a bigger head or frame helps less experienced players because the “sweet spot” on the racquet is bigger. When players become more advanced, they can move to a racquet with a smaller sweet spot.

Weigh is a factor in racquets too. Lighter racquets seem to be easier for new players. The lighter the racquet, the easier it is to swing. More advanced players tend towards heavier racquets which gives them more power.

Where to purchase racquets

You can go to a local tennis shop and talk to a pro, or you can go on Tennis Warehouse’s website and use their racquet demo service. We highly recommend this service. A player can pick out racquets, demo them and then send them back. If you decide to keep a racquet, Tennis Warehouse will give you $25 off the one you buy.* (*Some restrictions apply. Select brands and models.)

In conclusion, the answer is YES. If you feel like you need a new racquet or need advice on buying one, there are many options.

Mike has joined Second Serve for multiple episodes. You can listen to them here: