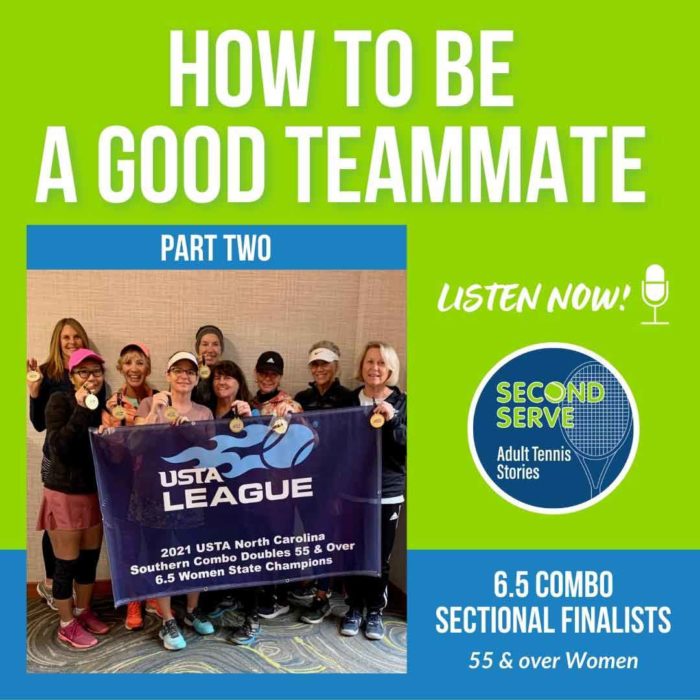 We don’t think it takes too much to be a good teammate on a competitive team. But since there are a lot of adult recreational players who play on teams, we thought it was a good topic to do a second episode about.

Tara is back to tell us about her 55+ 6.5 winning combo team. In 2021, Tara was the captain and took her team from the North Carolina State Championships to the USTA Sectional Tournament. They finished in second place at Sectionals!

There are a lot of things teammates can do to make a captain’s job a little easier. The first and most important one is players should have a “we” vs. “me” attitude. In other words, think about the success of the team over personal success on an individual court.

Camaraderie was a word that came up several times when talking to Tara. She and her team enjoyed how fun and competitive the tennis matches were at States and Sectionals. But more importantly, Tara told us the time the team spent together and the friendships that were deepened was even more special.

Tara talked about the mental aspects of tennis and what a privileged it is to be able to play. She said for her 55+ team, they decided to go to the Sectional Tournament in Mobile, Alabama because they might not get a chance again. They made the best of their time while they were there!

Things Players Can Do to Be a Good Teammate

Lastly, we talked about a few other things about how to be a good teammate on a competitive team. They were:

If you want to go back and listen to part one about how to be a good teammate on a competitive team, click here.

Thanks so much for listening and we’ll see you on the courts soon!