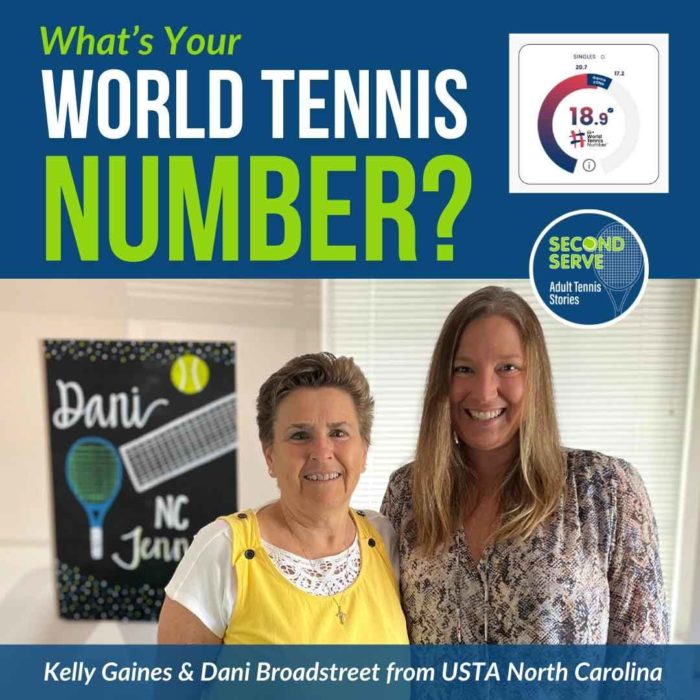 What is the World Tennis Number?

The world-wide governing body of tennis (the International Tennis Federation (ITF)) developed the World Tennis Number. The WTN was designed to be the most advanced and accurate rating system in the world. The system provides players a global standard for singles and doubles. Using a 40-1 scale, with 40 bing a beginner and 1 being an elite professional. Tennis players (regardless of gender, age, or ability) who have participated in a USTA league or tournament now have a World Tennis Number. The idea is that players with similar numbers would be able to play a competitive match against each other.

We are excited to learn that singles and doubles tennis matches are assigned separate numbers. If they have played enough matches, a blue check mark will be next to their number meaning it’s been verified.

Day One of WTN

We were excited to have Kelly and Dani sit down with us on DAY ONE of the launch! The WTN will not be replacing the current NTRP system. Instead, it will be another data point for players, coaches, tournament directors, etc. to use when placing or seeding players to achieve competitive tennis matches.

Generally, USTA league players are familiar with the National Tennis Rating Program (NTRP). In November or December each year, the NTRP ratings are updated and league players are assigned a rating which they will play in starting the following Spring season. On average, most league players are rated 2.5 to 5.5. League players then play at their level (or up a half level) and play in “buckets”. Players with higher NTRP numbers play at the upper levels in tennis.

The opposite is true with the World Tennis Number. WTN is a number system from 1-40. The lower the number on the scale, the better the player. Furthermore, the WTN is updated once a week (on Wednesdays) vs. only once a year like NTRP ratings.

Verified Data from all USTA matches and Tournaments

The World Tennis Number system uses verified data to determine a player’s number. The data has not been scrubbed from any other system outside of USTA’s TennisLink or Serve Tennis. It includes all adult leagues (not just the Spring season), mixed leagues, tri-level, singles, tournaments, etc. from the last five years.

We encourage anyone with a USTA account to check their number. In addition, they can also search for other players numbers. Search here or find out more about the World Tennis Number by visiting USTA’s website.

If you live in and play tennis in North Carolina and have questions about your WTN, contact Kelly or Dani. If you are in other state, contact your state USTA office.

We hope we’ve provided our listeners with the best tennis podcast to answer your questions about the World Tennis Number and have answered a lot of your questions.