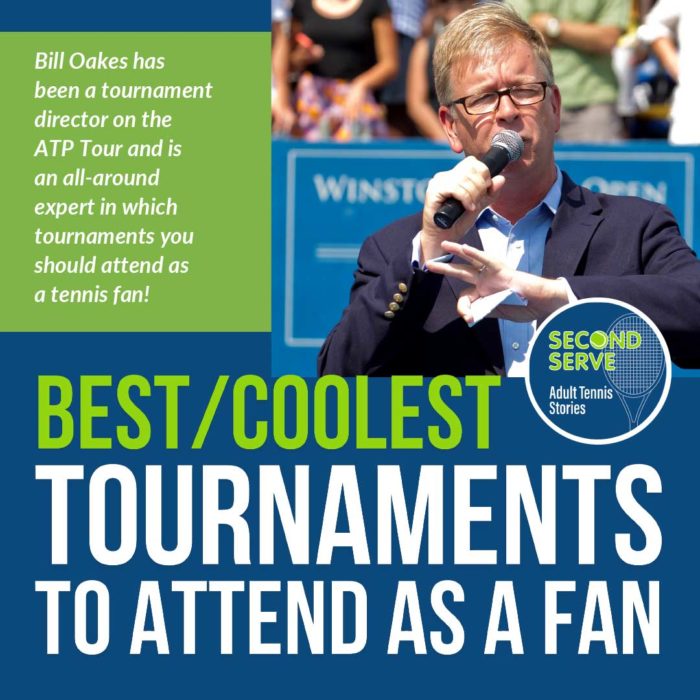 Ep. 121 Best/Coolest Tournaments to Attend as a Fan

Bill Oakes joins us to discuss what the best/coolest tournaments are to attend as a fan. Bill is a sports marketing, sponsorship, communications, and event production professional. He has worked at Wake Forest University, the Winston-Salem Open, and the USTA Southern Section. Additionally, Bill has been involved with numerous sports marketing firms over the last thirty plus years.

Bill has hosted tennis television and radio shows since 2004, including doing play-by-play at the US Open for usopen.org radio. He has been a tournament director on the ATP Tour, chaired ATP committees on Television and the 250s, served on the Tournament Council, and been an instructor at the ATP University during this period.

To say that Bill knows a thing or two about the best/coolest tournaments to attend as a fan is an understatement! He’s a tournament expert and has worked in tennis for over 30+ years.

One of Bill’s biggest accomplishments and one he is proud of was when the Winston-Salem Open won the 2016 ATP “Tournament of the Year” award.

Every tournament is unique and has positives and negatives. Following is a list of some of his favorites.

Best/Coolest Tournaments to Attend as a Fan:

Bill says it’s a fanatic event with amazing dining and grounds experience. It’s been coined “Tennis Paradise”. If you want nightlife after watching tennis all day, Indian Wells is not the tournament for you. But if you want a world=class grounds experience and amazing food on-site, this is a must-attend tennis tournament.

If nightlife and city experiences are your things, Bill suggests attending the Miami Open. The tennis venue itself though is a football stadium. That might not be for all tennis fans.

Bill tells us that if you want a “resort” tennis experience to attend the Acapulco tournament in February. This tournament attracts the biggest names in men’s tennis. RRafa Nadal won in 2022. The party goes on well after tennis is finished — usually until 6 am in the morning!

Bill said If you are a tennis fan and can find a way to make it to Wimbledon, do it. It’s “off the charts”. The ambiance, tradition and beauty of the tournament is worth the price. Go drinks some champagne and have a ball. While you’re there, go sightseeing in London and make a whole week out of your trip.

Most Snobby and Most Picturesque Tournament: Monte Carlo

For the tennis fan that has money to burn, make sure you get yourself to Monte Carlo. The tennis courts overlooking the Mediterranean Sea can’t be topped. All the hotels are within walking distance. Bill said this is his favorite tournament in the world. Talk about a snob, right?

Best Chance to Get Up Close to the Pros: Western and Southern Open – Cincinnati

The Cincinnati Open is the last, large tournament that all the pros show up to and play. It’s the tournament right before the US Open. The grounds are wide-open, and you’ll have the best chance of seeing the pros walking around blending in with spectators.

If you are near North Carolina and like to see some of the up-and-coming players on the men’s tour, the Atlantic Tire Championships might be just your thing. The event is held in September at Cary Tennis Park. The venue is a beautiful, 32-court facility with a stadium court and 7 covered courts.

Bill and Erin agree that if a tennis fan wants to get more up-close and personal with players, going early to tournaments is the way to go. If you only attend a tournament and sit in a large, main grandstand, you don’t get the best experience out of a tournament.’