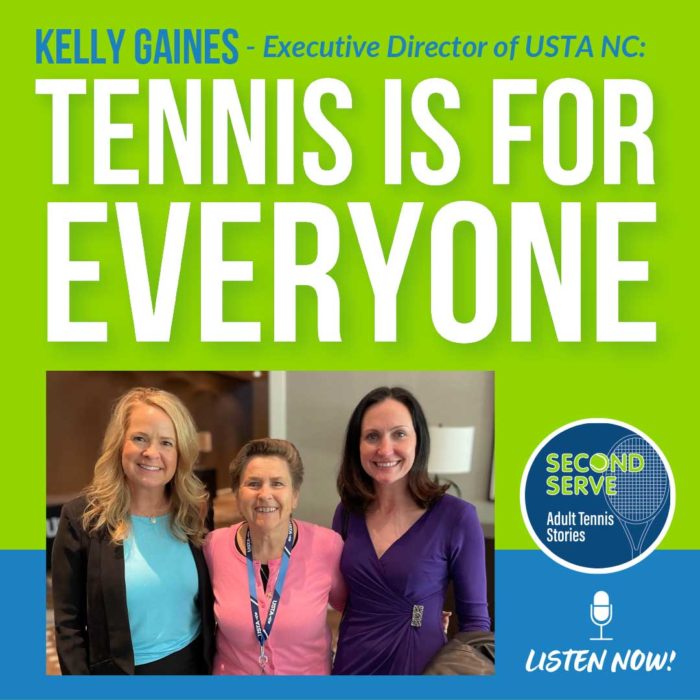 Kelly played tennis at William Peace University, was a pro at the North Hills Club, and went on to be the head coach of the NC State Women’s Tennis team before becoming the Executive Director of North Carolina Tennis.

Luckiest Human on the Planet

Kelly said she’s the luckiest human on the planet. She grew up playing every sport as a child. She was introduced to tennis by two boys who lived down the street from her and they were at the end of the street hitting a tennis ball. Kelly decided to take a racquet down to join them and the rest is history. Kelly was hooked.

After hitting with the neighborhood boys, she was invited to play at a local club. From there, Kelly played in high school and then in college at William Peace University. At the time, it was a women’s-only college but has since become a four-year, co-ed university. Kelly received a scholarship to play at Peace College.

After college, she went on to teach tennis. She transferred to UNC Chapel Hill and continued to learn how to teach. Once she graduated, Kelly took a job at North Hills Tennis Club in Raleigh, NC. North Hills took a chance on a 23-year-old young woman to be their teaching pro. This shaped Kelly’s path to go on to be the assistant coach at the university level for both the men’s and women’s teams at NC State University.

How Title Nine Affected Everyone Including Kelly’s Career

Once Title Nine was implemented, NC State University split the men’s and women’s teams into two, and Kelly was offered the head coach position for the women’s team. Throughout that time, Kelly was volunteering which ultimately led her to her current role as the Executive Director of the North Carolina Tennis Association. Kelly has been in that position for over 20 years.

Tennis is for Everyone

Kelly said the main thing she wants people to know about her story is that someone asked her to play. The best thing we can do as players to grow the game is to just simply ask people to join in on the fun. Tennis is for everyone!

Carolyn and Erin recorded an episode called “How to Get Your Friends to Start Playing Tennis”. If you’d like to hear it, click here.

Kelly also joined us for one of our most popular episodes about the ITF World Tennis Number. Check that out here.