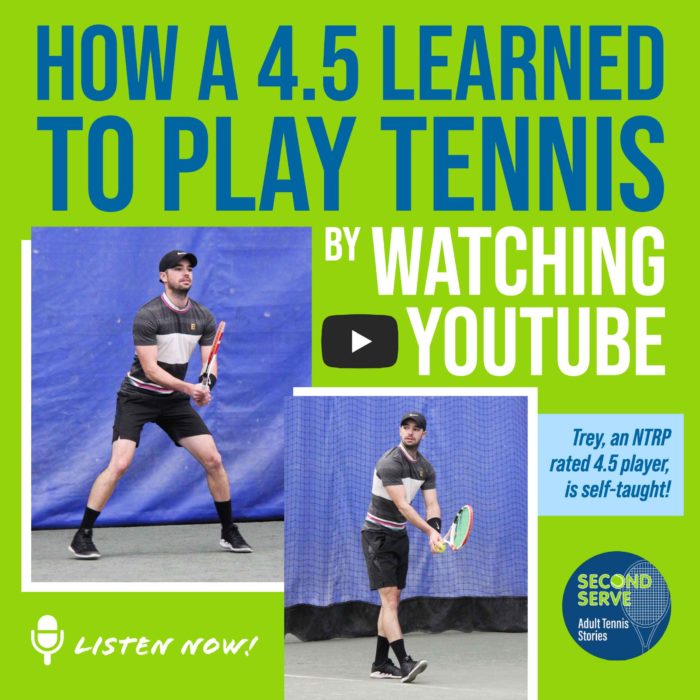 Trey is an NTRP rated 4.5 player who taught himself to play tennis. We asked him if its’ really possible to learn to play tennis by watching YouTube. His answer is YES! Trey has only been playing tennis for about 8 years but much of what he learned, he found online.

Trey’s wife, Meghan, is a tennis pro and is an NTRP rated 5.0 player. She happens to be Carolyn and Erin’s pro and has been trying hard to teach them to play tennis correctly for years! To keep their marriage intact, Trey did not enlist the help of his wife to learn how to play the game.

When Trey first became interested in tennis, he watched a lot of pro tennis matches on tv. To learn how hit the ball well, he started watching YouTube. Trey is left-handed so he watched a lot of Rafael Nadal videos. He learned how to hit with a ton of topspin and tried to emulate his backhand as well. He also learned how to slide on clay based on Rafa videos. Although Trey says his swings aren’t as majestic as Rafa’s, opponents have commented on how much his swing looks like Nadal’s.

The Key to Climbing up the Rankings

Trey said the key to climbing up the NTRP rankings quickly was playing up to a higher level. He said the YouTube videos where helpful to learn technique but that the true key to his success was playing better tennis players than he was and learning all he could from them. It’s also possible to be a high-ranked player by learning to play tennis by watching YouTube!

One of Trey’s most memorable moments on the tennis court was when his combo team got a wildcard to go to the USTA State tournament in Wilmington, NC. During the tournament, they ended up having to face their rivals who had beat them in playoffs at the local level. In a very tight match, Trey and his doubles partner won their match which advanced their team to the finals. Trey’s team came home with a win that year (which happen to be the first time he played on a USTA team).

Trey will join us again next month to talk about tennis court construction. He works for a company that installs and maintains tennis courts. Watch for that in a few weeks! We ask him questions like:

We’ve hosted other 4.5 players on the podcast. You can listen to their episodes here: