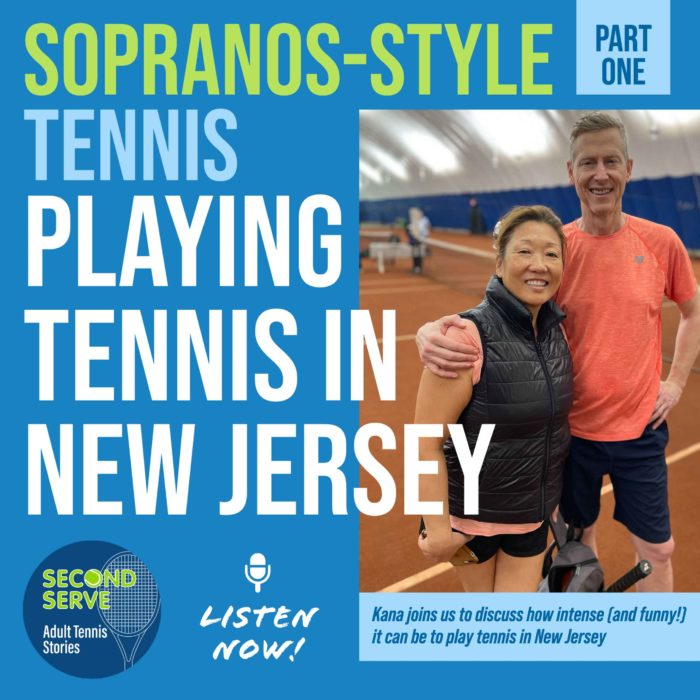 We are constantly surprised to hear how tennis experiences are so different depending on where you live. For instance, playing tennis in the Raleigh, NC area is calm compared to playing in the northeast. This week, Kana joined us to talk about her experience of what she called “Sopranos-style tennis – playing in New Jersey”.

We have heard interesting comments from people that have played tennis in the northeast and how different it is. For instance, we have been told that you can’t “flip courts” in the northeast. You are required to play straight up (meaning you must play your strongest players on higher courts). In our area, captains have the choice of playing any player on any court. They are allowed to flip (or roll) courts to give their team the advantage of winning a match.

Raleigh is filled with USTA leagues. Sometimes we have so many that we have issues with court availability. New Jersey, however, isn’t as focused on USTA matches and is less popular. When Kana lived in New Jersey, she played in “The Garden State Women’s League”. They were coached by a gentleman that could have starred in The Sopranos! It was required that players purchase $600-$800 worth of team uniforms (including matching shoes!!) from the Nike Spring line. We have had others on the show to talk about tennis fashion which you can listen to here.

Kana told us more about Sopranos-style Tennis – Playing in New Jersey and said she enjoyed the league, but that it was obvious that it was a big money-maker. We’ll call her coach “Tony” to make our story make more sense. Tony would set all the lineups, picked the partners and strongly suggested that the women take clinics from him. To be on Tony’s team you had to go through try-outs. Once you were part of the league, getting a sub for a match was extremely frowned upon. Kana said each lady needed to be available for every match. What?! Are you understanding the Sopranos-style tennis now?

Let’s “Take it to the Parking Lot”

We hope you’ll listen to the entire episode! It was fun to hear about what it’s like to play tennis in New Jersey. Threats of fighting on court or “taking it to the parking lot” is a common occurrence. Kana also tells us about when she played on a USTA team, they got kicked out of their local area. They had to drive to Pennsylvania to play matches!

North Carolina tennis is TAME compared to her experience in New Jersey. We’ll have a second episode next week to hear about more crazy situations!