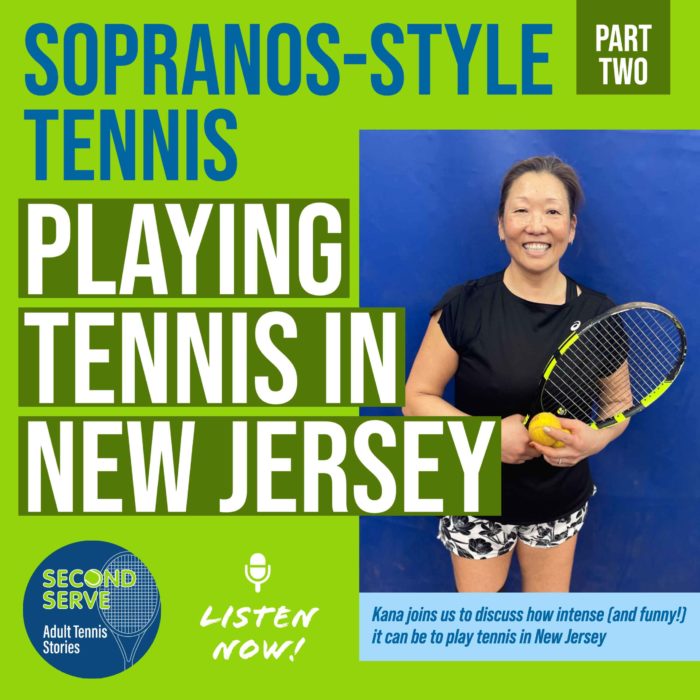 Kana is back to tell us about experience playing adult recreational tennis in the Northeast. That’s why we’re calling this Sopranos-Style Tennis, Playing in New Jersey!

In the Northeast and particularly in New Jersey, tennis players tend to be more intense than playing in other parts of the country. Kana said there was never a dull moment when playing and that it was common for people to get angry threaten to fight an opponent.

Indoor tennis was intense because there was a time-limit on courts. They only had two hours to play a match and if that match was tied up after 1 hour, 45 minutes, teams would have to play a tiebreak to determine the winner. Kana said people would stall and drag the clock out to win a match. That’s when fights would ensure. We couldn’t imagine this happening in North Carolina!

People take tennis very seriously! And after talking to Kana, its sounds like the Sopranos-Style Tennis in New Jersey is even more serious. Once she had an opponent tell her partner that was drinking a Red Bull that she can’t do that because it’s “a performance enhancing drink; you can’t drink that”. What?!

Kana’s theory to the intenseness of matches in New Jersey to people being successful in their careers. She thinks since they’ve had a taste of success in life, they expect to be successful on the tennis court. When they don’t win or get their way, they take it harder and are willing to fight for a win.

Kana told us that she has been to more than a few meetings where a team discussed kicking off one of the players. She’s also been to meetings with teammates where they discussed replacing their captain! You won’t find that happening in Raleigh.

Do You Have a Crazy Story?

Does this happen around other parts of the country?! We know there are some crazy stories about playing tennis out there so please send them our way if you have one!

If you missed Sopranos-Style Tennis, Playing in New Jersey Part One, listen now!