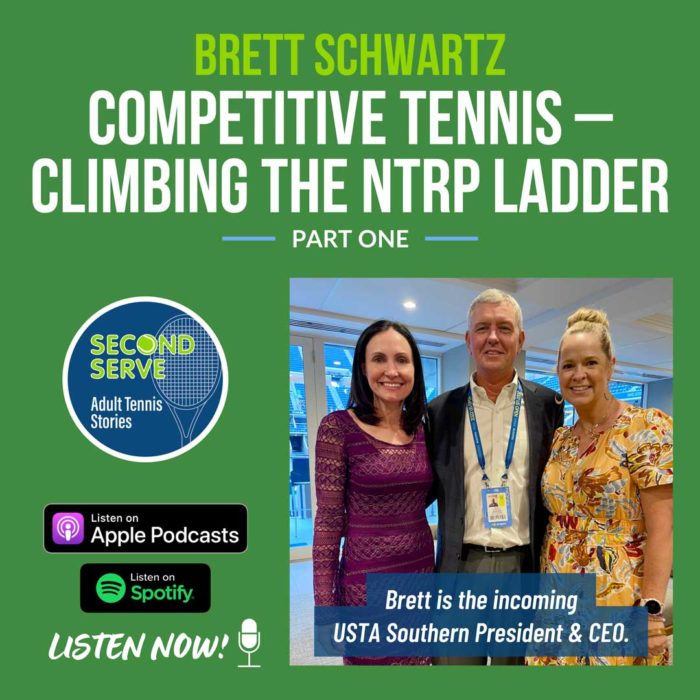 This week we’re welcoming Brett Schwartz to the show. We met Brett in Atlanta at the 2022 USTA Southern Awards ceremony. Brett is the incoming President & CEO of USTA Southern. After finding out he wrote a book called “Competitive Tennis – Climbing the NTRP Ladder”, we knew our listeners would love to hear his tennis story.

Brett grew up playing basketball and found tennis later in his teens. Once he started playing, he fell in love with the game and his high school team won the Louisiana state championship. After high school, Brett was recruited to play D1 tennis at Louisiana State University (LSU).

After college, tennis became a large part of his life. Brett has been a coach and has run several tennis clubs.

In the 80s and 90s, Brett noticed Tennis Magazine articles were written by professional tennis players. Those articles didn’t include real-world advice about how recreational players can improve their tennis game.

For that reason, Brett knew that average players needed more direction about how to improve their skills which would help them win more matches. By winning more matches, players would naturally climb to a higher NTRP rating.

Inspired by that idea, Brett and his writing partner, Chris Dazet, wrote the book “Competitive Tennis — Climbing the NTRP Ladder”. To Brett’s surprise, all the published copies were sold and the book was also translated into Russian.

What We Enjoy About the Book

Each NTRP rating is broken down into separate chapters in the book. It covers ratings from 2.5 to 5.5 and talks about skills a player should have at each level. More importantly, the book covers what skills to improve to move up in ratings.

We suggest you listen to the entire episode. Brett gives Carolyn and Erin a free tennis lesson simply by talking through a receiving strategy on first serves. Additionally, many rec players don’t play strategy correctly which includes not playing “high percentage tennis”. We’re sure your game will improve if you follow Brett’s advice!

NTRP Ratings – What You Should Know

We previously recorded an episode called “What Should You Be Able To Do At Each Level? Characteristics Of Different Rating Levels”. If you’d like to listen, click here.