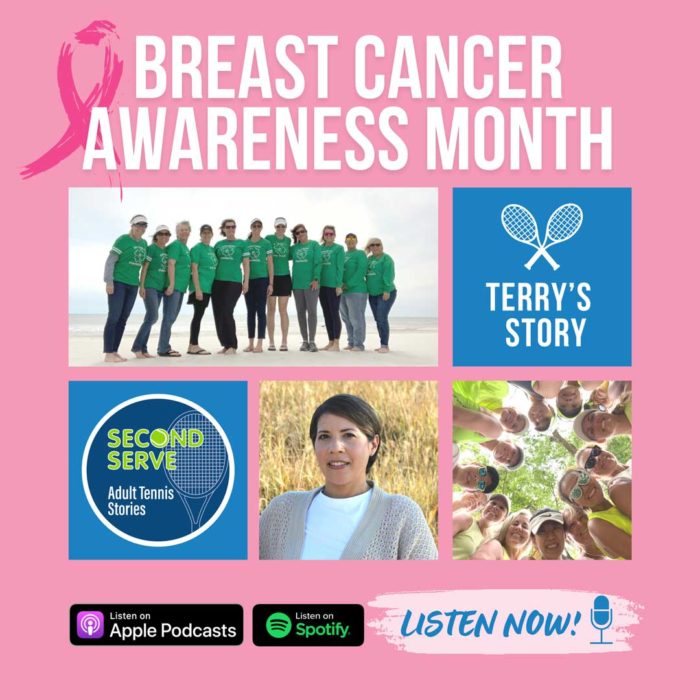 October is Breast Cancer Awareness Month. Terry joined us to talk about her incredible story of being able to continue playing tennis through her treatments.

Terry is on the Raleigh Tennis Association’s board of directors and is a 3.5 player. She has captained numerous teams that have won the state championships and sectionals.

Tennis is for Everyone

Terry played tennis when she was younger but didn’t pick up a racquet and start playing again until a friend asked her to play in 2014. She was 40 years old at the time and thought that ship had sailed but her friend insisted that tennis is for everyone. Her friend was right! Terry started hitting again and realized how much she had missed the game.

Through tennis, Terry met amazing friends. When she found out she had breast cancer in May 2021, her tennis friends were the ones that really came to her aid. She asked some of her tennis captains if they would have her on their teams and not a single one hesitated. That year, Terry said she played the best she had ever played.

Compassion and Kindness from the Tennis Community

Terry said she never needed tennis more than when she was going through chemo treatments. Her tennis friends and the tennis community showed compassion and kindness and helped her through the roughest times. In the Fall of 2021, her combo team played a tough playoff match against a club that had beaten her team time after time. That year, Terry’s team came out the winners and their opponents were so happy for Terry that they asked to take photos with her. Terry said, …”it was the sweetest form of sportsmanship I had ever experienced.”

Tennis as a Mental Health Boost

Not all tennis players can play through breast cancer treatments. Terry consulted with her doctors and came up with a plan to allow her to do just that. Playing tennis was the best form of mental health uplift she could have imagined.

Please be sure and get a yearly mammogram! Breast Cancer Awareness Month is a great time to get screened. Early detection is crucial.

According to the American Cancer Society, when breast cancer is detected early, and is in the localized stage, the 5-year relative survival rate is 99%. Early detection includes doing monthly breast self-exams, and scheduling regular clinical breast exams and mammograms.