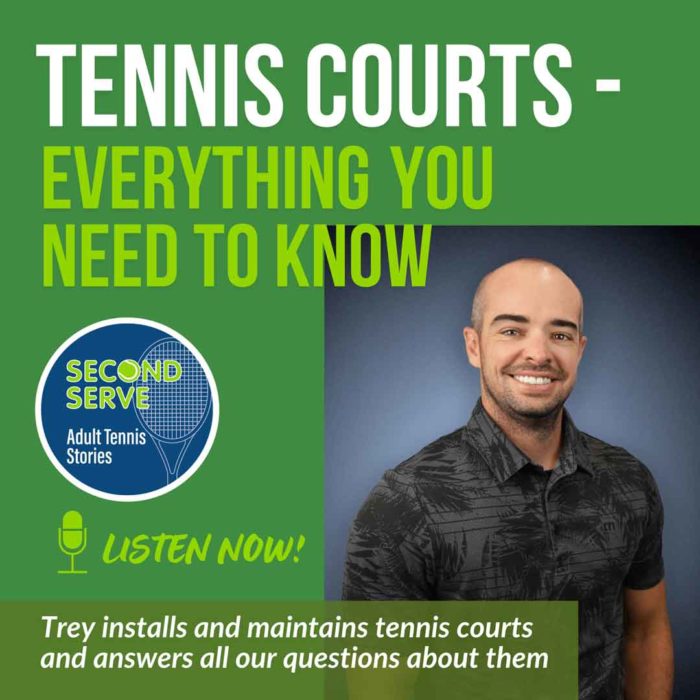 Ep. 109: Tennis Courts – Everything You Need to Know

Have you ever wondered how tennis courts are built? Or what types of surfaces there are and why you need to wear special shoes for them? Or the biggest question of all…. can I afford to install a tennis court in my back yard? Isn’t that the most important question? We have all the same questions so we recorded “Tennis Courts – Everything You Need to Know” with Trey. Trey, who has joined us on a previous episode, installs and maintains tennis courts.

Trey explained that special shoes are needed on clay tennis courts because the surface of the tennis court moves with you. On asphalt hard courts, you don’t have to worry about what shoes to wear.

Often, when people start, they don’t know there’s a difference between a “running shoe” and a shoe made specifically for tennis. Erin has always called all running shoes “tennis shoes” and she and Carolyn have both been kicked off clay courts by a pro because they didn’t have the correct shoes. It can be intimidating to know what to wear which is why we recorded this “Tennis Courts – Everything You Need to Know” episode!

What Are the Color Trends with Hard Courts?

We also talked to Trey about colors of hard courts. Carolyn wanted to know if there are color trends in tennis courts. Trey explained that currently, the most popular colors for hard courts are the same colors used for the U.S. Open (grass green for the outbound and dark blue for the inbounds).

We also asked about “Smart Courts”. Carolyn and Erin would like a magical court that calls balls in or out. Does that exist? Trey politely told us we were nuts. Magic courts that will call balls in or out don’t exist but there are “cushion court systems” and some interesting watering systems for clay courts. But… you know what does call balls in or out no matter what the surface? SwingVision! SwingVision works on any court surface, and we are ambassadors for the product. If you order through our referral link, you can get $20 off the pro version or $100 the pro version plus a fence mount.

We recorded three episodes about SwingVision if you want to learn more. Here are direct links to them:

The Most Important Question of All…

Can Second Serve get enough advertisers and affiliate links to afford to put a court in Carolyn or Erin’s yard? Trey says the answer is yes, but we would need somewhere between $58,000-$65,000 to do it. So, the real answer is no!

We hope you enjoyed listening to Trey talk about everything you need to know about tennis courts. He joined us earlier for a great episode about how he taught himself to play tennis by watching YouTube videos which you can find it here. Trey currently an NTRP rated 4.5 player.