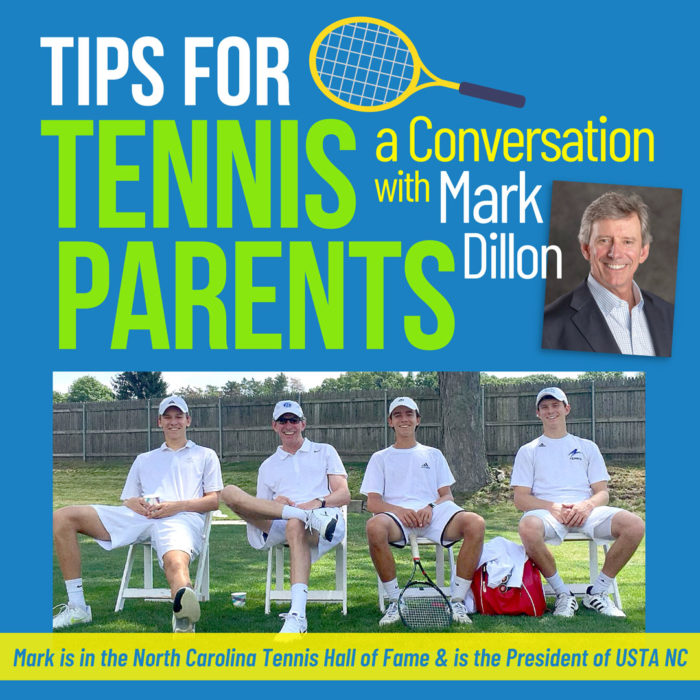 Ep. 138: Tips for Tennis Parents — a Conversation with Mark Dillon

Growing up playing tennis is fun but what happens when you become a “tennis parent” and watch your kids go through the highs and lows of playing? This week we’re talking about Tips for Tennis Parents — a Conversation with Mark Dillon.

Mark was introduced to tennis by his parents. His mom wanted him and his brother to play in the worst way so she bribed them. She said, “if you take a tennis lesson, you won’t have to buy me a birthday or Mother’s Day present.” Mark and his brother decided to take the deal and they never looked back. They fell in love with tennis and the rest was history. That single bribe ended up paying for two college tuitions. Mark and his brother both went to college on a tennis scholarship.

Mark played college tennis at NC State where he won two ACC singles championships, an ACC doubles championship, and NCAA All-American honors in 1981. His brother played at NC State University as well. In fact, tennis has been such an influence in his life that he met his wife playing tennis and she ended up playing at the University of Georgia.

Mark and his wife, Adele, have three sons who also became great tennis players. Mark joined us to tell our audience tips for tennis parents because they have become experts in the subject.

In addition, in 2019, his family won the Family of the Year Award from North Carolina.

Other Episodes with Tips for Playing in College

You may be interested in other episodes where we talk to guests about what it was like to play tennis in college. They can be found here: